Immersive technologies such as virtual reality (VR), augmented reality (AR) and mixed reality (MR) either represent reality completely virtually or supplement it with exclusive virtual information. Extended Reality (XR) solutions are also becoming increasingly popular in the health sector and in medical technology and enrich medical processes from prevention to support in diagnosis and surgical interventions to the rehabilitation of patients.

In our new arcoro INNOVATIONS, you can learn more about the areas of application and current trends of extended reality solutions. In addition, we have researched an overview of national and international companies that have specialised in the innovation area of medical extended reality. Are you already familiar with the technologies behind this? What future potential do XR technologies have in medicine and what exciting use cases could we expect? You can find answers to these questions in our Market Insights as well as in an exclusive interview with an industry expert. Were we able to arouse your interest? Download the free white paper and benefit from our research and the aggregated and prepared information on the topic of extended reality in medicine!

The term Extended Reality (XR) is used to describe any combination and fusion of real and virtual environments as well as human-machine interactions. Extended Reality is the representative umbrella term for Augmented Reality (AR), Virtual Reality (VR) and Mixed Reality (MR). It offers users the experience of visually, acoustically and haptically entering other places and worlds. This is made possible by innovative computer technology and the use of specific wearables.

Did you know that the origin of Extended Reality goes back to the 1st9 century? As early as 1838, Sir Charles Wheatstone outlined the basis of stereopsis, on the basis of which the first stereoscopes were developed. With the help of these devices, pairs of images could be converted into 3D images that gave the viewer an illusion of depth. To this day, stereoscopic displays are used in VR systems to add depth to digital images and allow the user to be immersed in the situation.

In the 1950s-70s, VR and AR technologies could be seen in practical use for the first time. Morton Heilig Sensorama developed the first VR machine. This made it possible to display a colour video in three dimensions using stereoscopic technology and at the same time to immerse viewers in the depth of the film using smells and movement. In 1961, Philco produced the first VR headsight headset with integrated motion tracking technology for military use. MIT was the first to1978 create a computer-generated tour based on photos taken during a drive through the city. With the help of the “Aspen Movie Map”, it was possible for the first time for users to experience going to another place through VR.

The complete whitepaper on the topic of Extended Reality - VR, AR, MR in medical technology. Simply fill out the contact form & read our newest arcoro INNOVATION.

Thank you for your interest!

Shortly you will receive an email with the free whitepaper - arcoro INNOVATION - Health wearables.

In the 80s and 90s, the technology was further optimised. The first VR glasses and gloves were sold on the market by VPL Research Inc. and the first VR arcade machines like the SEGA VR-1 motion simulator. But extended reality didn’t make its real breakthrough until 2010, when the prototype Oculus Rift VR headset was created, offering users a 90-degree field of view. In 2014, Sony and Samsung announced they were developing their own VR headsets. Google also introduced its first Cardboard device as well as the Google Glass AR glasses, which were, however, only sceptically received by consumers. The introduction of Microsoft’s HoloLens headset in 2016, which gave users an interactive experience through AR, was a game changer in terms of extended reality. Today, the use of extended reality solutions is spreading to a variety of industries, including medicine and healthcare.

The digitalisation of society and the economy is revolutionising medicine in its individual fields. The use of extended reality solutions is becoming increasingly important, especially in surgical medicine. Among other things, the technology is used in surgery simulation and operation planning. It is also used for preoperative surgical training and for intraoperative navigation through patient-specific 3D reconstruction and preoperative sectional imaging. Extended Reality is also increasingly gaining demand in clinical aftercare and rehabilitation due to promising treatment approaches.

The market for AR, VR & MR applications currently generates a global turnover of 30.7 billion USD (as of 2021). By 2024, a market volume of USD 296.9 billion is already forecast. Focusing exclusively on the healthcare sector, forecasts for the global market are around USD 11.4 billion by 2025, according to BIS Research. Compared to the turnover of 2.54 billion generated worldwide in 2020, this corresponds to growth of around 503%. These are mainly tools that support medical professionals in surgical simulation, training and routine patient care. 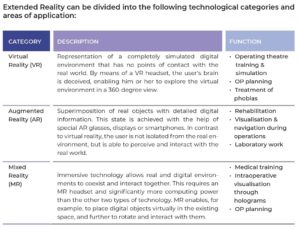 Extended reality tools are increasingly being used in medical student education. By using VR headsets, students and surgeons can gain a deeper understanding of the anatomy and functioning of the human body. Simulating specific surgeries can also train precision and execution without endangering patients or requiring medical cadavers. With the help of VR technology, surgical treatment concepts are presented in an intuitively understandable way. The three-dimensional experience is based on complex 2D representations from imaging MRI or CT procedures.

VR applications can not only support processes, but can also be used for medical treatments. In cognitive behavioural therapy, extended reality solutions are used primarily in the therapy of autism, phobias and addictive disorders. The treatment is carried out by immersing patients in virtual stressful situations and exposing them to fear-inducing stimuli while allowing them to process them in a safe, real and non-threatening environment. Fears and disturbed behaviour patterns can be specifically addressed while the patient learns to control their own emotions and reactions in the acute situation and to cope with the challenge. The treatment is a gradual process in which the user is slowly introduced to their own fears and behavioural disturbances and the therapy is adapted according to individual progress.

3 Extended Reality in the operating theatre

On the one hand, AR technology supports the surgical procedure as a visualisation and navigation aid. By means of optimised visualisation, surgeons receive real-time information about what they see and can even share the views and information with specialists or students for training purposes, if necessary. The data is transmitted either via a tablet, a projector or directly via data glasses. Optical tracking systems allow the surgeon to receive information about the patient and live images of the body via monitors, optimising the surgical procedure to achieve the best possible results.

On the other hand, surgeons can be supported by the use of holograms in the operating theatre. In this way, surgeons can prepare themselves specifically for the operations. In addition, holograms serve to provide a more vivid and better understanding when informing the patient about the upcoming operation. The 3D models of organs, blood vessels or tumorous tissue created in advance enable precise planning of the procedure during the operation and help surgeons to precisely assess and localise the anatomical conditions. With the help of mixed reality, the surgeons can have the patient images from MRI and CT scans displayed holographically on the data glasses and thus recognise which tissue is affected. 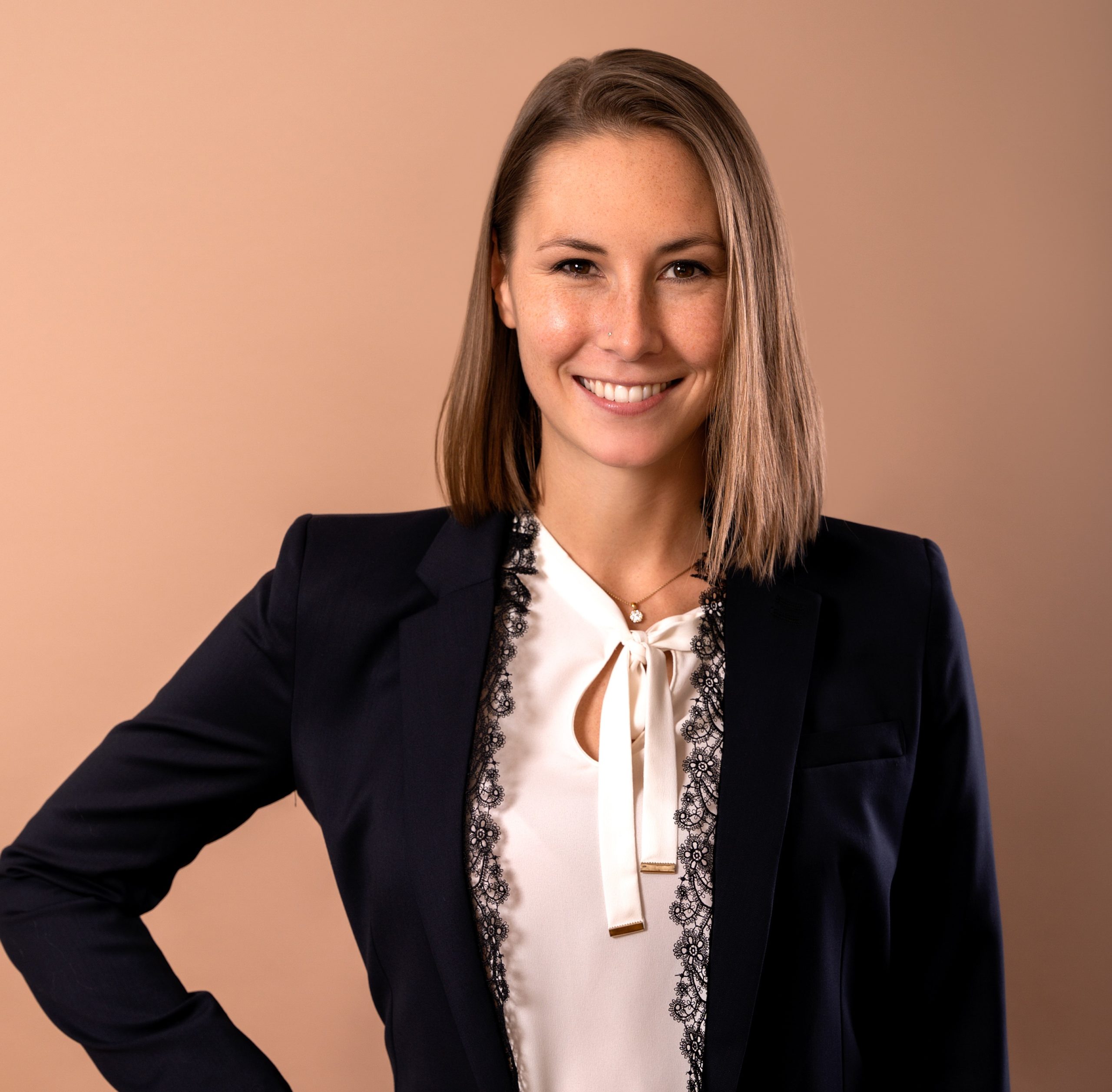 If you are under 16 and wish to give consent to optional services, you must ask your legal guardians for permission. We use cookies and other technologies on our website. Some of them are essential, while others help us to improve this website and your experience. Personal data may be processed (e.g. IP addresses), for example for personalized ads and content or ad and content measurement. You can find more information about the use of your data in our privacy policy. Hier finden Sie eine Übersicht über alle verwendeten Cookies. Sie können Ihre Zustimmung für ganze Kategorien geben oder sich weitere Informationen anzeigen lassen und bestimmte Cookies auswählen.